Start typing and press
Enter to search
Skip to content

`I could tell you my adventures–beginning from this morning,’ said Alice a little timidly: `but it’s no use going back to yesterday, because I was a different person then.’ 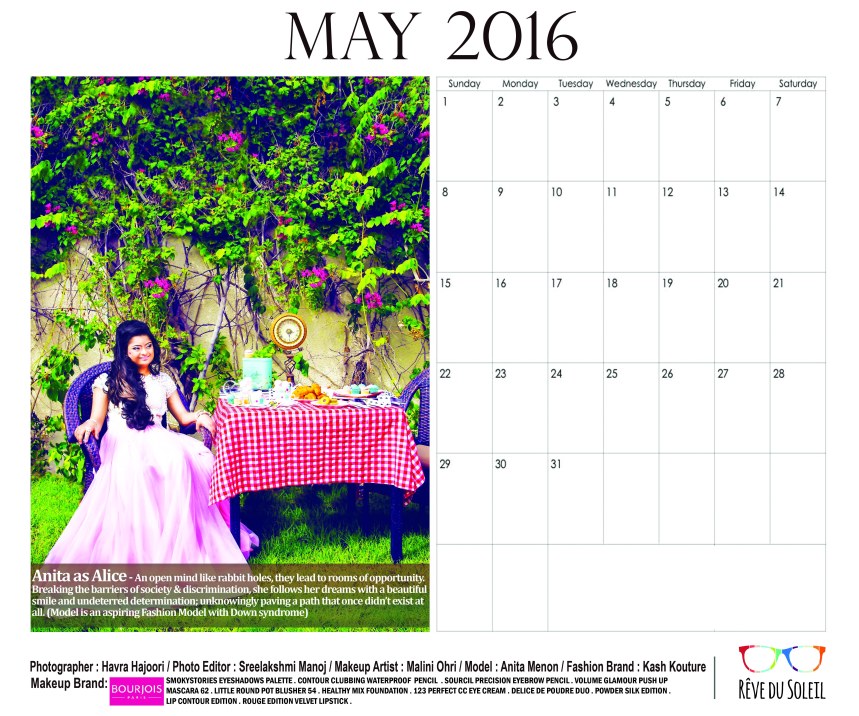 While it is easy to begin her story from the time she was born, it is however a more enriching journey to know where she is at. Anita Menon loves to model, she is good at arts and craft, she enjoys playing music and photography, she is skilled at working on the computer and she stitches very well. So, the question to ask is – Is she special or is she unique? 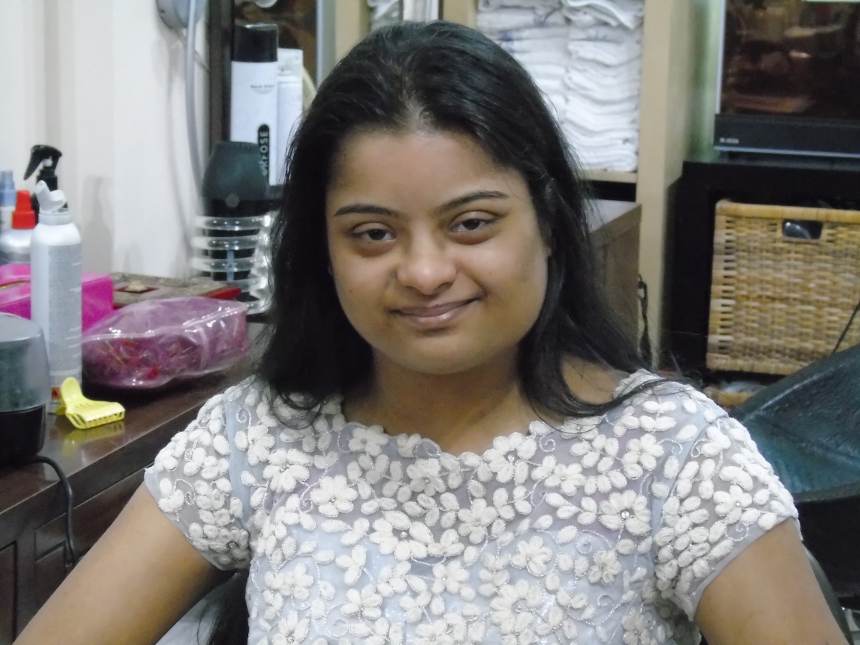 Anita laughs innocently when asked is there anything that you have not yet done? Her immediate reply is, “Everything that I can.” Her eyes light up as she adds, “I want to be the best model and I know office work also.” There is a sense of wonder that surrounds her. She is excited to be in this place of so many achievements. Her pure heart reflects in the few words that she uses with complete poise and confidence. Her mother, Usha fills in the details. “Anita was born a blue baby – she did not cry at birth, she received immediate first aid and life support so that she could breathe. She also had jaundice and needed to be cared for delicately. The first few days were the most testing. We did not know what to expect. Her tiny body seemed so helpless. Even when she cried there would be no sound. Anita was born tongue tied. Two days after her birth the doctors told us that she was a Mongol baby. We had no idea what that meant. We were advised to monitor her developmental stages. Every day was a challenge. We fought fever, cold, stomach ailments – there was seldom a day of good health for her. By the second month we found out that she had a murmuring heart with two holes. Doctors said she would not live beyond three years. It was heart wrenching to see her weak and in pain so often. Soon after her third birthday her condition began to rapidly decline. We had to take a decision. She was to undergo open heart surgery and the chances of survival were just 40%. We chose to trust our prayers and God’s mercy. The surgery took place and from there on she became stronger. Anita is a fighter from birth. Nothing has held her back because we saw her as special. She is the person she is and her condition does not define who she is.”

Anita is 23 years old and has a mind of her own. She has a very close bond with her elder sister Anjali who never treated her as a girl with special needs. In fact, her parents feel that is it is due to this attitude and complete acceptance that Anita has become so independent. “When the doctors told us that she has Down’s Syndrome, we didn’t know what it is. Then I started to read about it and talked to doctors. We brought her up just like any normal child. Both our families were very co-operative and we used to take her to every family gathering. Initially, people used to look at us in sympathy and felt sorry for us, but then they also accepted her and she was the centre of attraction for all.” 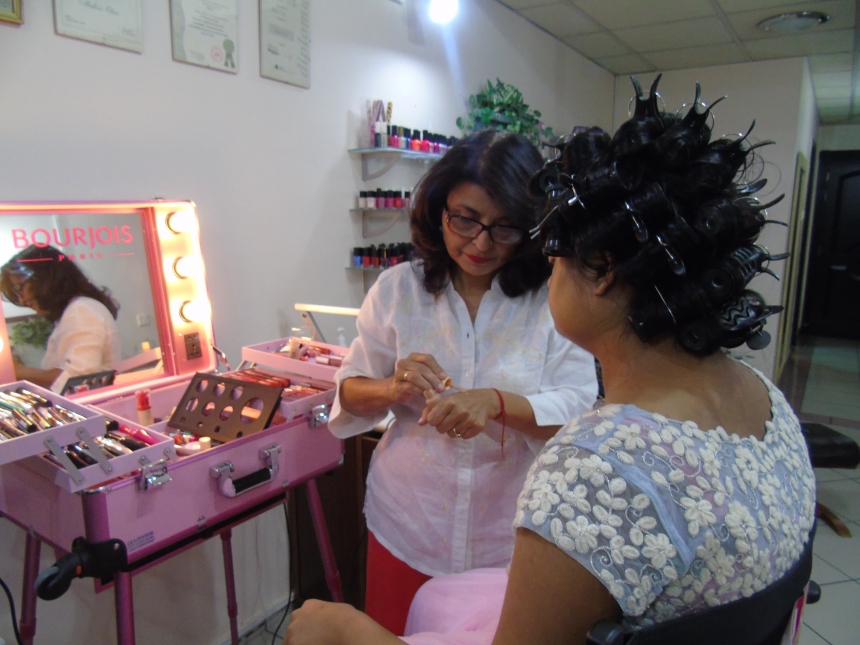 Indeed it is love and encouragement that takes any child forward. Anita is intricate and detailed in her work. At age five she got admission at a normal school in her home town in Kerala. Then after about a year the family moved to Dubai. Getting enrolled in a normal school became a hurdle. At Al Noor Special Needs Centre she underwent speech therapy and by 1998 she joined Rashid Paediatric Centre in Al Barsha. “While we were in India the hustle bustle of family and friends would keep her occupied but once we reached here it was just me and her at home. Anjali would go to school and her father was at work most of the day. To create a lively and enriching atmosphere at home I began to babysit children. With them she loved to play and talk. Her abilities got better. Little ones are always so caring and they love to play and don’t care about any differences,” smiled her mother. 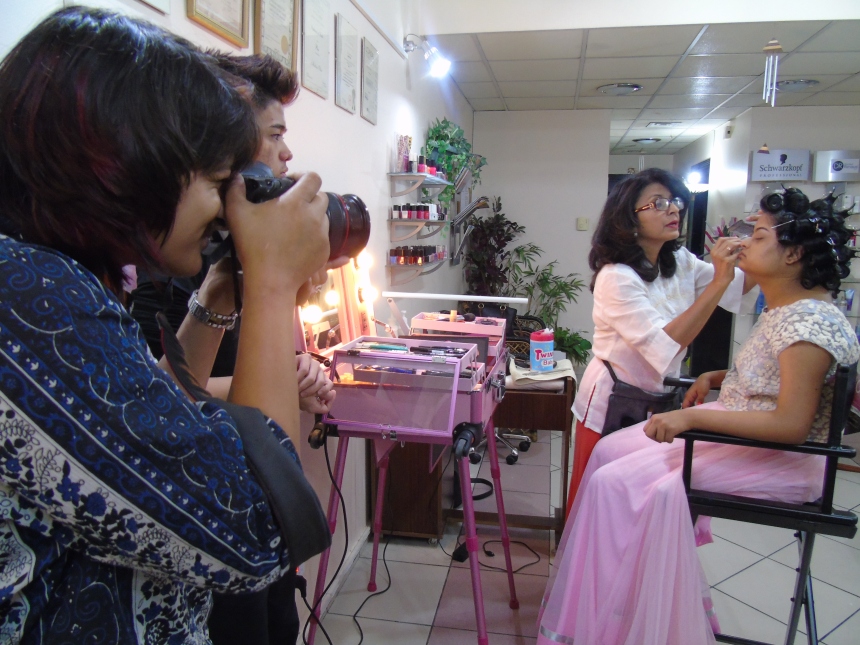 “At every stage I was supported. My parents did not say no,” said Anita. “I know how to work on Excel. I do powerpoint. I also know Msword. I have done training for office work at Dubai Police, Villa Rotana and also ADNOC.” 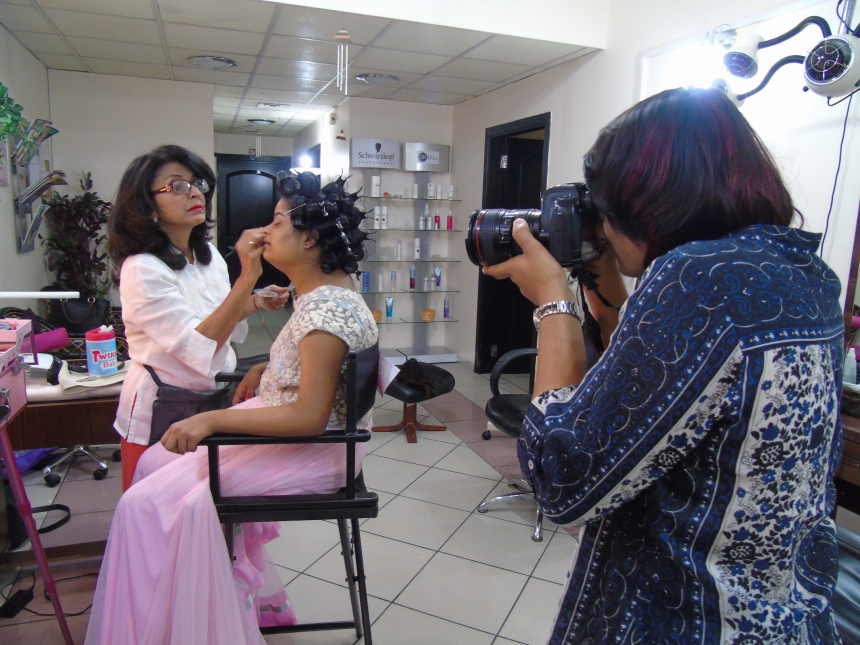 Anita stumbled upon the world of modelling during a visit to India. Her cousin had gotten a professional portfolio done and was on this career path. This intrigued her. She wanted to get a photoshoot done and try her luck in the modelling world. Her parents agreed. That summer when they got back to Dubai Anita was booked in for a photo session at Rose Studio. Her mother shared her details with some advertising agencies and also wrote to Friday magazine about her. “We did not get any response from the advertising agencies but Friday magazine wrote back. Before we knew it she was at the Gulf News studios doing a full fledged photoshoot. She carried herself with so much confidence. They did a wonderful article also about her. This was when we heard about Zareen Khan and the unique events she does. Calendar Girls came across as so much more than a message about women empowerment. It was about changing the mind set and how people see beauty. It was about being real to yourself and not fitting in any stereotypical box. Together we approached her and Anita was welcomed whole heartedly on the project. It was a wonderful experience to be with the whole team and their positive energies,” said Usha. 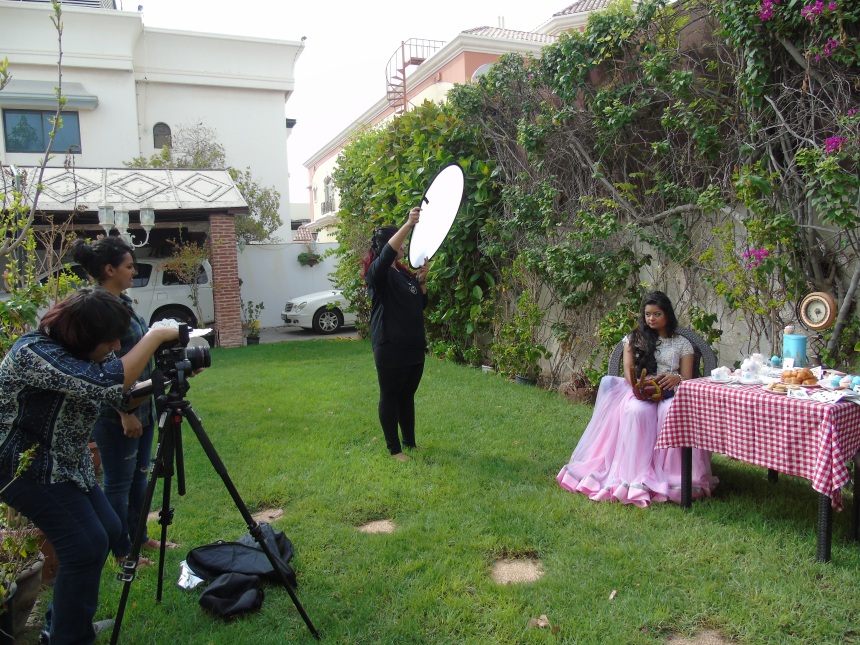 “Calendar Girls is special. They made me look so pretty. I like my hair and make up. The dress was pink! I sat in a garden when they took my pictures. I chose Alice because, like Alice I also like to travel in the world of dreams. I am courageous, kind and curious to know about things like Alice,” said Anita. “I loved being part of Calendar Girls because I want to send across the message that nobody is perfect, be confident about yourself and nothing is impossible.” 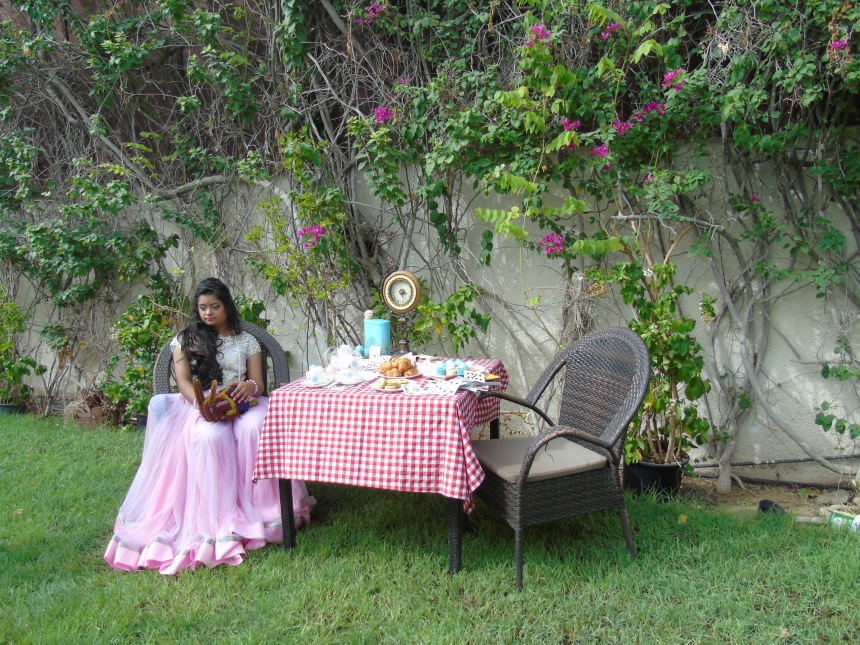 In the story, Alice says, How long is forever? The White Rabbit replies, Sometimes, just one second.

Anita is testament that all it takes is one moment to change things around. Between that second of silence and when she cried without a sound she proved that she is a fighter. In that moment of being short of breath yet full of life she proved that she can win. And so in her smile she has a message of beauty and trust. She knows that she is here not just to live but to let people know that we are beyond what others can see. 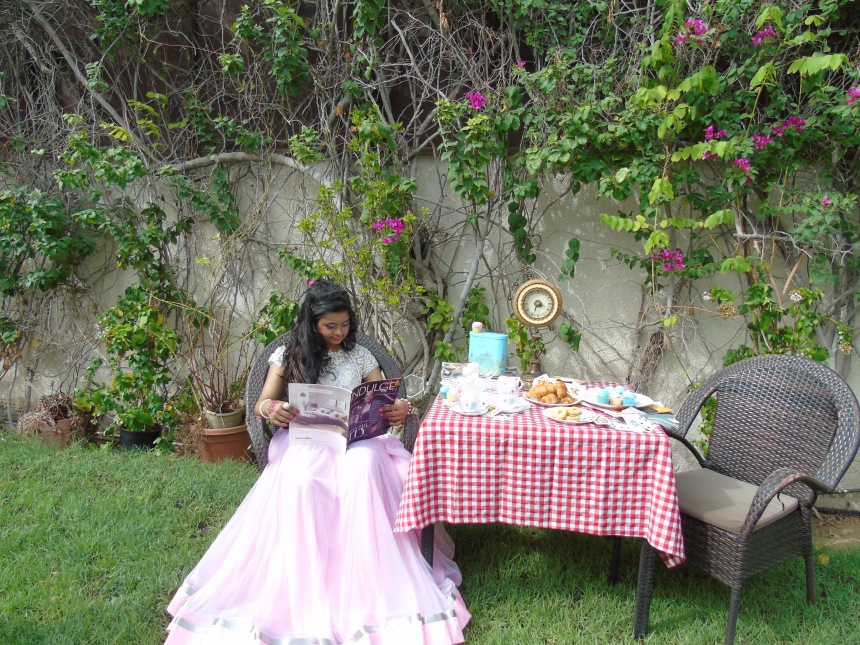 “A smile makes anyone beautiful. A truly beautiful woman is loving, caring and patient,” she smiled. “Be beautiful from inside and kind to all. Beauty lies within, in being the real you.”

The ethos behind the program is to develop campaigns through marketing and events that promote positive body image in Men and Women.

Calendar Girls had over 14 role models for young women to identify with and inspire from, the personal stories of these 14 women will be showcased in this unique calendar.

Theme for 2016 : Fairytales – each image for the photo shoot was inspired by the person’s own favourite character – the idea behind it is, the each one of us really are, “our own super heroes”.

To learn more about w2w: w2w.events.dubai@gmail.com